The following letter will be mailed next week, less two signatures. Unfortunately, the letter went to the printer before I received the final two endorsements. But I promised Steve House and Alan Rupe I’d add them before posting the letter on the web site. If you would like to endorse the campaign don’t hesitate to let me know. There’s plenty of room on the team.

With these two attorneys on board, that makes 61. I’m humbled that so many respected attorneys are willing to publicly support me. I hope that the last eight weeks of actual judging played a big part in the latest surge of support. 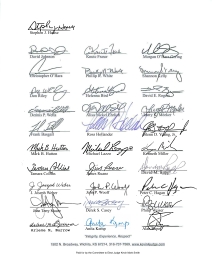